One of the minor pleasures of collecting books by and about Edward Carpenter is the discovery of inscriptions and inclusions. These are seldom of much biographical significance but do throw a little light on the man. EC was a great signer of his own books (and of other peoples).
Starting at the end, in the early 1980s I bought, in a secondhand bookshop in Tonbridge Wells, a copy of the Fifth and Cheaper edition (17th impression) 1931 of Towards Democracy. 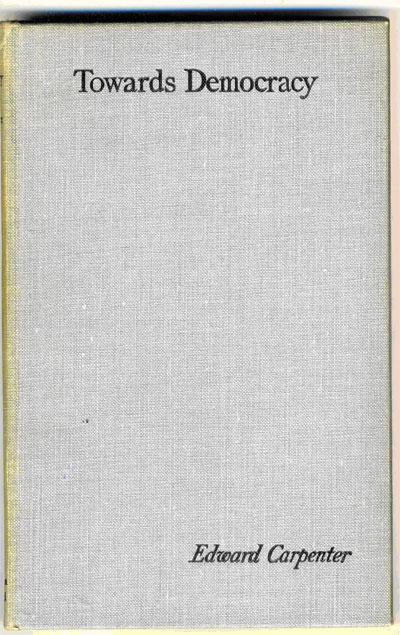 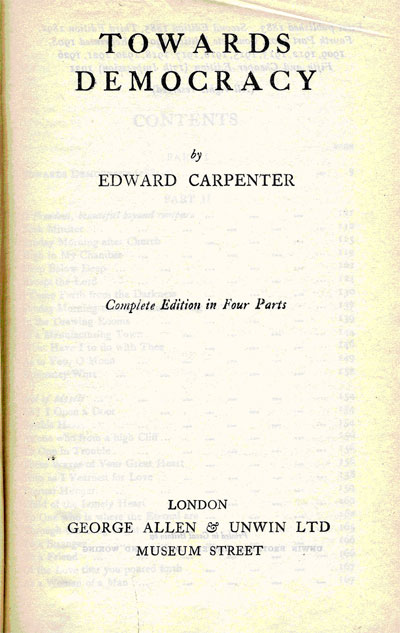 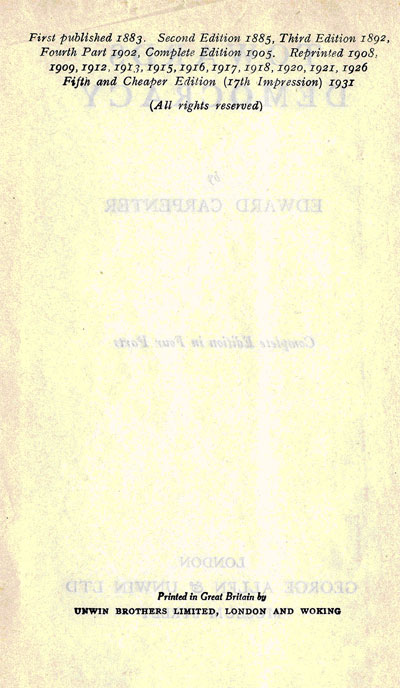 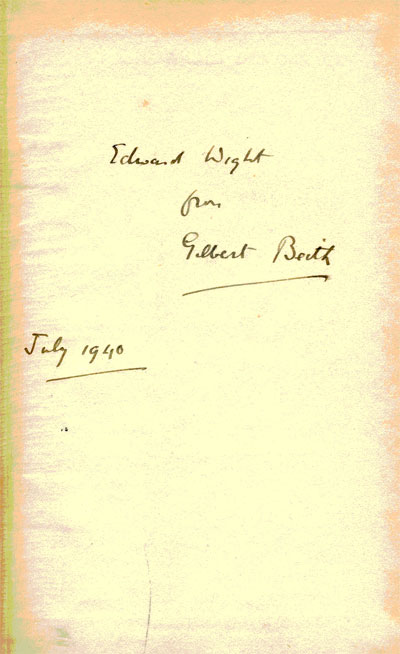 Edward Wight was presumably a friend of Beith who was one of Carpenter's three literary executors and edited the memorial volume. So it was very nice to find, tucked into the book 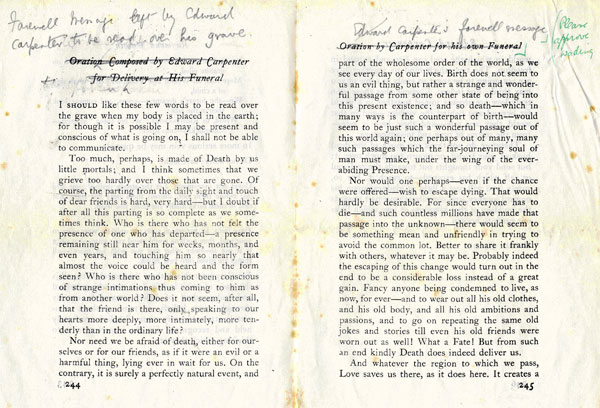 I think the pencil correction is by Beith. Presumably the "oration" was by an Unwin sub-editor and Beith brought things down to earth!
Long before this, in 1916, EC, in his autobiography, had become the first person in Britain to come out as gay. This copy has an interesting ownership. 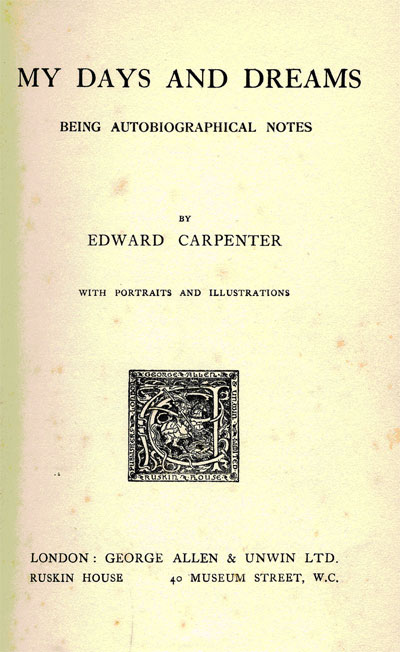 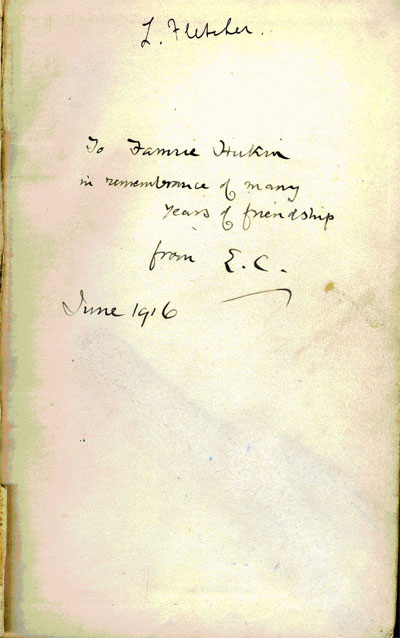 Fannie Hukin was George Hukin's wife and Carpenter bought them their wedding bed. L Fletcher was the Hukin's daughter. The copy has been read & read and is almost falling apart. It contained a snaphot. 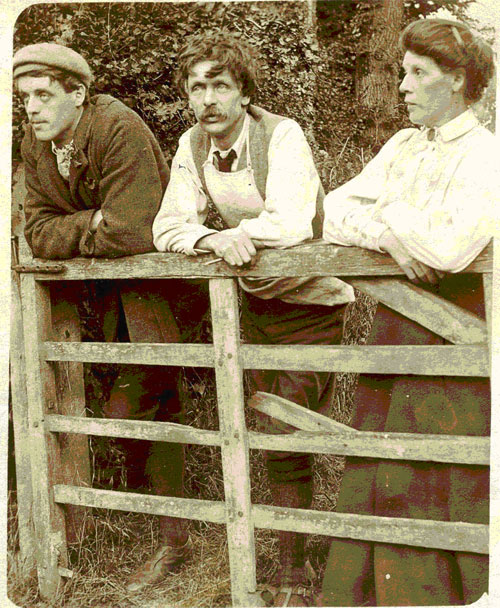 I haven't gone to Sheffield to compare this with photos they hold. Does anyone recognise it?
Some other photos have turned up 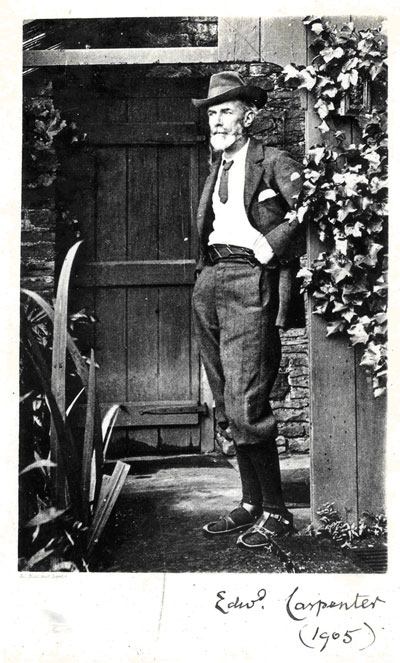 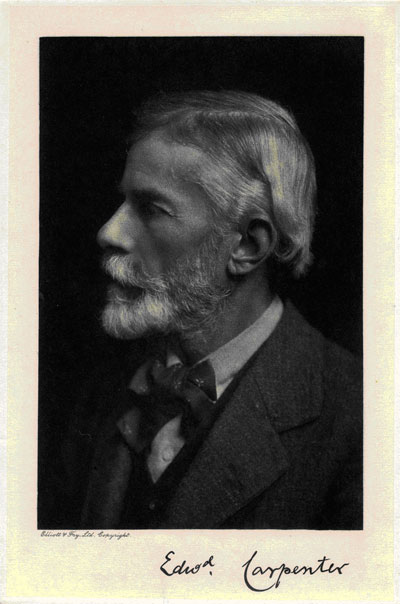 The first is well known and this example has been printed as a Post Card. Did he send them himself to admirers? I always thing he looks like a very respectably Wild West gun slinger! The second is a studio portrait by Elliot & Fry, Ltd. I found 20 of these in a bookshop in St Albans also in the 1980s.

The next is the hut at Millthorpe in which EC wrote most of Towards Democracy. 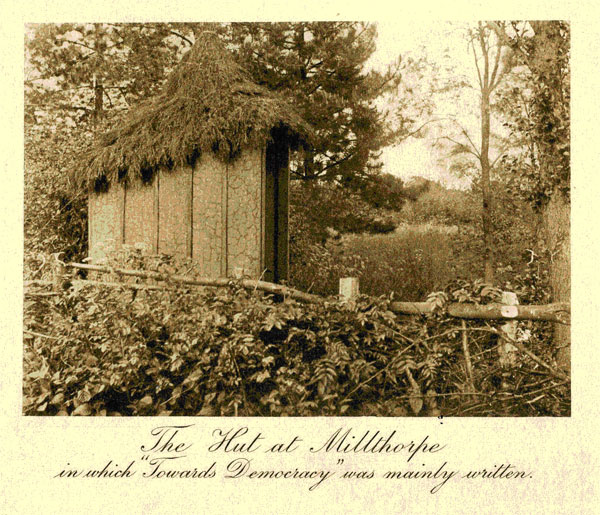 This again was printed in quantities . It is a better photo than the one in My Days and Dreams. 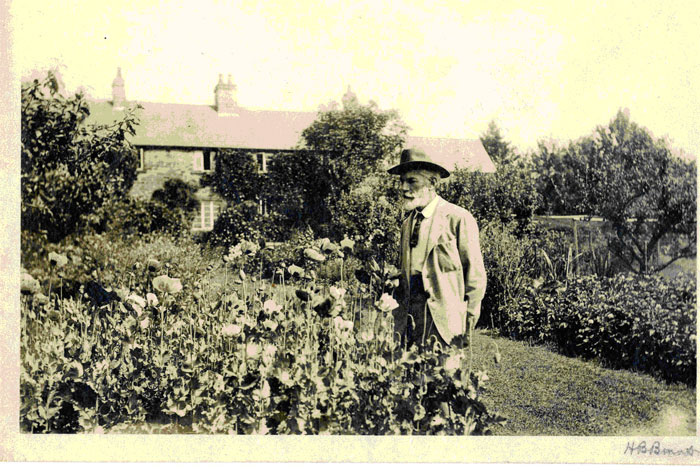 Henry Bryan Binns (who took the photo?) did research work for Carpenter in the British Museum in 1904. This copy has an inscription on the back. 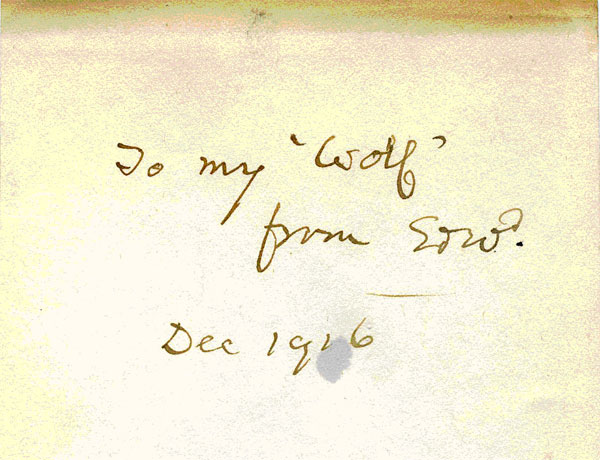 ‘Wolf' was Bertram Lloyd - a long time friend of EC. He knew Magnus Hirschfeld and Laurence Housman among many others.

I'll end this short piece by going back to the early days of Towards Democracy. 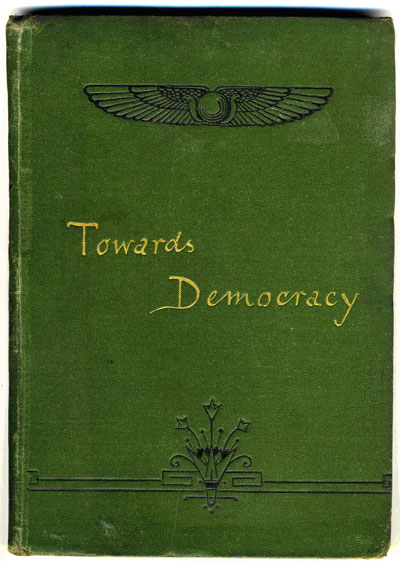 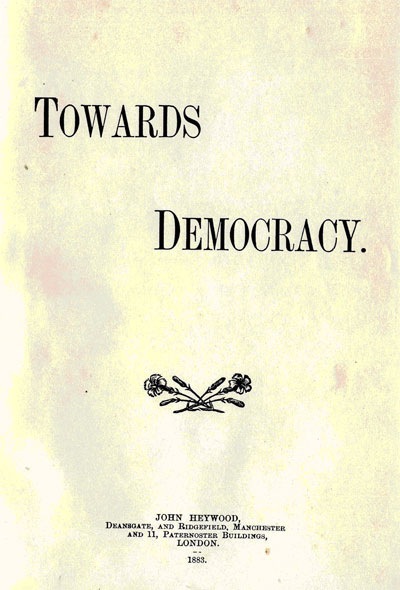 The first edition nowhere carried EC's name. Plenty of copies survive and most of those I have seen have inscriptions. This one is from the copy EC gave to his brother. 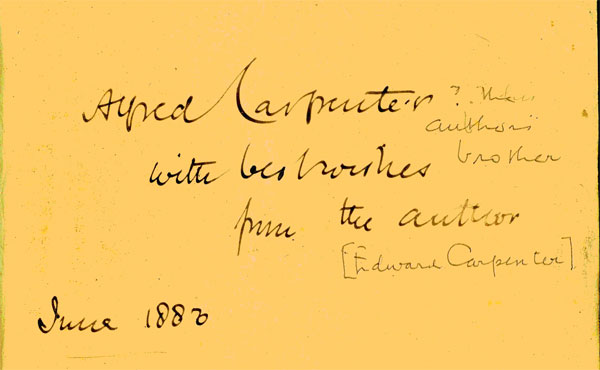 The 2nd edition was double the size. This edition still did not give EC as author but he did claim copyright. 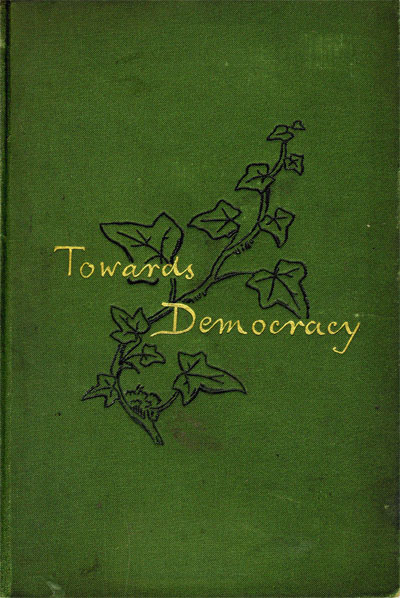 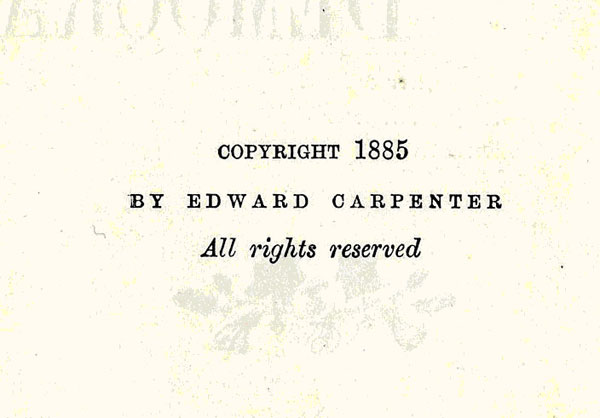 This copy was given by EC to George Hukin., one of EC's three lovers called George.

The 3rd edition is a very rare book, far more difficult to find than the first. EC published Part 4 of TD as a separate book. But it was followed almost immediatelt by the first complete edition so EC seems to have been left with a lot of unsold copies. It is quite common and the number signed by EC suggests he kept them at Millthorpe as gifts for visiting admirers.

The inscriptions below could stand as a very potted biography of Edward Carpenter. 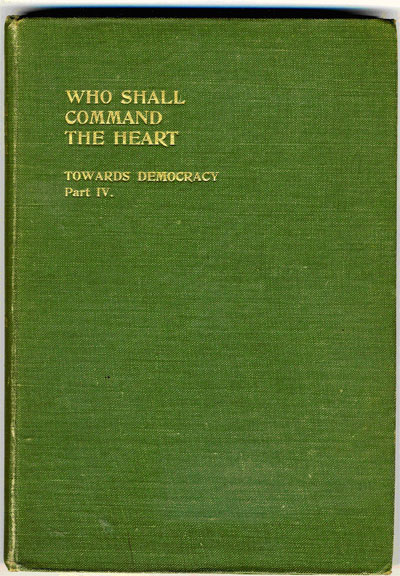 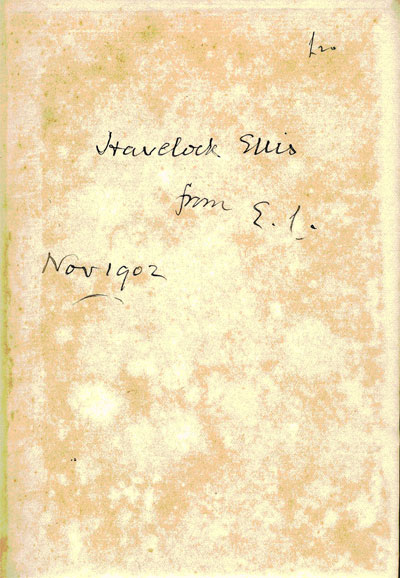 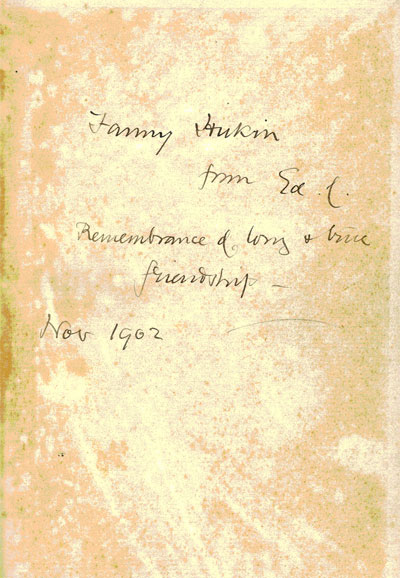 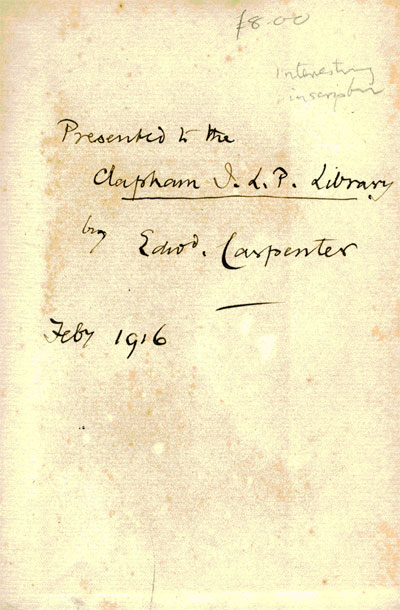 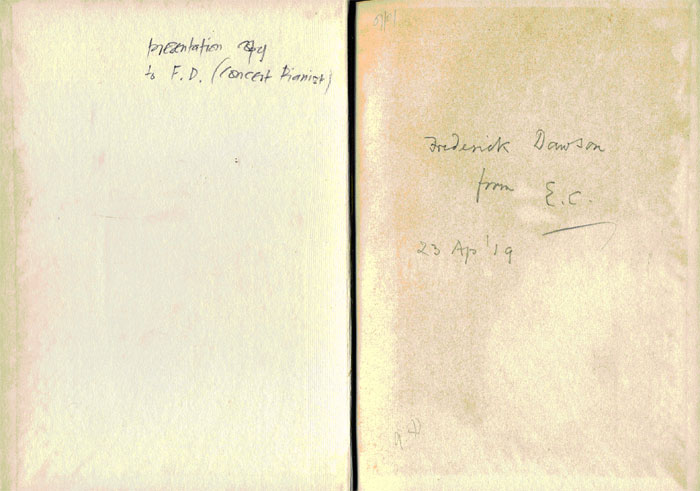