Books of interest to our readers.

War, Journalism and the Shaping of the Twentieth Century: The Life and Times of Henry W. Nevinson

WAR, JOURNALISM AND
THE SHAPING OF THE
TWENTIETH CENTURY
The Life and Times of Henry W. Nevinson

Called the "King of Correspondents" Henry W. Nevinson (1856-1941) captured the political zeitgeist of the 19th and early 20th centuries. Covering conflicts across the globe, the British war correspondent commented on war in Greece, the Siege of Ladysmith, the aftermath of revolution in Russia in 1905-6 and the tragedy at Gallipoli, helping to shape understanding of world affairs at the time. He also campaigned for rights in Angola, Ireland and India. At home he was a strenuous advocate of women's suffrage. Nevinson was the first to report sympathetically on Germany's devastation after the First World War. In the 1920s he accompanied Ramsay MacDonald on the first visit of a British Prime Minister to an American President. Although courting the establishment, Nevinson cultivated controversy as a rebel. Yet he remained a highly admired journalist and was a vivid and acute observer who wrote exquisite prose. Drawing on Nevinson's private diaries which span nearly 50 years, Angela V. John captures, for the first time, the story of a figure whose perspectives whether on the Balkans, the Caucasus, the Middle East or the United States, illuminate many of the conflicts which resonate in today's uncertain world.

Angela V. John is Honorary Professor of History at the University of Wales, Aberystwyth. For many years she was Professor of History at the University of Greenwich in London. She has published extensively on women's employment in nineteenth and early twentieth century Britain and was one of the founders of the International Journal Gender & History. Her previous books include a biography of the American-born actress, novelist and suffragette Elizabeth Robins.

"This is a fascinating account of a forgotten feminist. Evelyn Sharp was an 1890s ‘new woman' who became a militant suffragette before 1914 and became renowned both as a journalist and children's writer. Angela V. John's lucid and scholarly biography brings her back into view, illuminating the social and political history of her era while skilfully weaving into the story Sharp's long, secret love affair with the Guardian journalist she eventually married - Henry Nevinson. "
Professor Shelia Rowbotham

This is the first biography of a remarkable writer and incorrigible rebel. Evelyn Sharp's story encapsulates the shifts in opportunities for talented Victorian women who survived into the mid-twentieth century.

She was born into a privileged family in 1869 and became a very popular writer of schoolgirl fiction. Extremely versatile, she also produced fairy tales alongside stories for the infamous ‘Yellow Book'. A Manchester Guardian journalist for over four decades, Evelyn Sharp became the first regular contributor to its iconic Women's Page. Before and during the First World War she was a leading suffragette, editing the newspaper, ‘Votes for Women'. Imprisoned twice, she was the last British Woman to refuse to pay taxes because she lacked the vote. Increasingly committed to pacifism and international humanitarianism, the 1920s saw her working with Quakers in Weimar Germany. After a long and volatile relationship with the radical war correspondent, Henry V. Nevinson, the couple married when she was sixty-three.

This biography draws on Evelyn Sharp's publications, as well as letter and diaries vividly describing experiences such as famine relief in Soviet Russia and daily life in wartime Kensington for an elderly woman. It will be of particular interest  to historians and those interested in children's and women's literature as well as to anybody who enjoys biography and social history.

To read a sample chapter from the book, click here.

Contains a chapter on the British "disciples" including Carpenter. Symonds and Wilde . Another chapter is dedicated to Carpenter's dear comrades of the "Eagle Street Collage" in Bolton, England.

Despite his protests, Anne Gilchrist, distinguished woman of letters, moved her entire household from London to Philadelphia in an effort to marry him. John Addington Symonds, historian and theorist of sexual inversion, sent him avid fan mail for twenty years. And volunteer assistant Horace Traubel kept a record of their daily conversations, producing a nine-volume compilation. Who could inspire so much devotion? Worshipping Walt is the first book on the Whitman disciples--the fascinating, eclectic group of nineteenth-century men and women who regarded Walt Whitman not simply as a poet but as a religious prophet.

Long before Whitman was established in the canon of American poetry, feminists, socialists, spiritual seekers, and supporters of same-sex passion saw him as an enlightened figure who fulfilled their religious, political, and erotic yearnings. To his disciples Whitman was variously an ideal husband, radical lover, socialist icon, or bohemian saint. In this transatlantic group biography, Michael Robertson explores the highly charged connections between Whitman and his followers, including Canadian psychiatrist R. M. Bucke, American nature writer John Burroughs, British activist Edward Carpenter, and the notorious Oscar Wilde. Despite their particular needs, they all viewed Whitman as the author of a new poetic scripture and prophet of a modern liberal spirituality.

Worshipping Walt presents a colorful portrait of an era of intense religious, political, and sexual passions, shedding new light on why Whitman's work continues to appeal to so many.

Michael Robertson is professor of English at the College of New Jersey. He is the author of the award-winning Stephen Crane, Journalism, and the Making of Modern American Literature and the coeditor of Walt Whitman, Where the Future Becomes Present. A former freelance journalist, he has written for the Village Voice, the New York Times, Columbia Journalism Review, and numerous scholarly journals.

"For some devoted readers in the late nineteenth century, Walt Whitman was a 'man magnified to the dimensions of a god,' and Leaves of Grass a divinely inspired gospel. In a series of entertaining and acutely observed biographies of the 'Whitman disciples,' Robertson situates their fervor in a complex religions landscape."--New Yorker

"Michael Robertson has written a fascinating book on those who thought of themselves as nearest and dearest to Walt Whitman--incontestably 'America's greatest poet'. We've seen quite a few substantial biographies of Whitman, and they score the various points their authors intended to score, but Mr. Robertson's book takes a new and altogether refreshing direction by introducing us, in some depth, to Whitman's true-blue disciples. Mr. Robertson illuminates...the poet's enduring appeal over the generations [and] has written a rich, memorable book. He wears his considerable erudition lightly, and he writes like a dream."--Michael Redmond, Princeton Packet

"Michael Robertson's Worshipping Walt...introduces us to a handful of the 'hot little prophets' who made a cult of Whitman, and also reminds us of the religious purpose of his poetry--with Leaves of Grass as gospel."--Adam Begley, New York Observer

"Robertson's collection of reflective biographies brilliantly illuminates Whitman's life and the wider life of his poetry. It is a book of the physical, intellectual and spiritual adventures, and the author's own adventures with Whitman are not the least of its pleasures."--Michael Schmidt, Financial Times

Edward Carpenter (1844-1929) was a proponent of a "larger" Socialism, one that embraced the liberation of the emotional and spiritual life along with the economic. A small-holding farmer and cultural and political activist, he advocated the Simplification of Life and put his beliefs into practice. A man of letters, he published over 20 books, including his collection of poems Towards Democracy, and numerous additional articles. He campaigned through out his life on many issues of social concern, ranging from women's suffrage to the protection of the environment, from sexual emancipation to the formation of trade unions. A unifying spiritual vision underlay all of his life and work. As a homosexual man, he lived openly and in quiet celebration while his writings and example laid the foundation for the homosexual freedom movement of the twentieth century. More on Edward Carpenter...
Through his many friendships, Edward Carpenter transversed again and again the divisions of class, gender, sexuality, race and creed. Men and women from across the world and from all walks of life came into connection with each other through him and his home at Millthorpe in Derbyshire, England. Appreciative of this, the Edward Carpenter Forum welcomes a diversity of men and women from around the world and from a wide range of interest groups; social, political or academic.
The Edward Carpenter Forum Website
Issue 4
August 2010

Mystical Encounters with the Natural World:
Experiences and Explanations by Paul Marshall 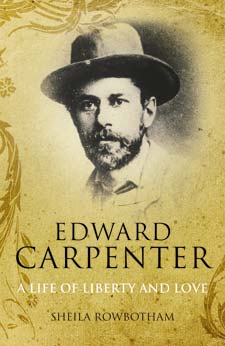 Click Here To Read What The Press Is Saying about Edward Carpenter: A Life of Liberty and Love.