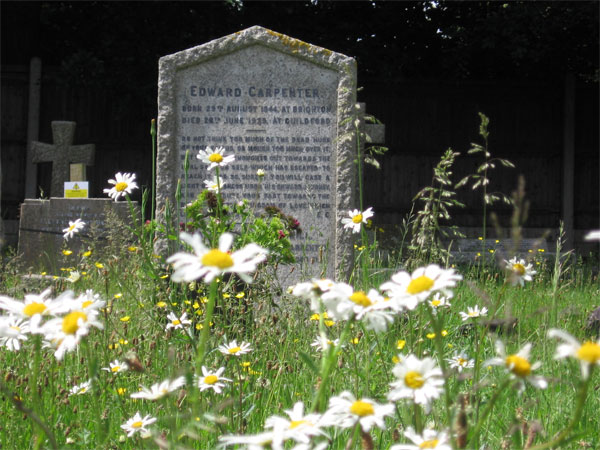 Farewell Message left by Edward Carpenter to be Read over his Grave
I SHOULD like these few words to be read over the grave when my body is placed in the earth; for though it is possible I may be present and conscious of what is going on, I shall not be able to communicate.
Too much, perhaps, is made of Death by us little mortals; and I think sometimes that we grieve too hardly over those that are gone. Of course, the parting from the daily sight and touch of dear friends is hard, very hard-but I doubt it after all this parting is so complete as we sometimes think. Who is there who has not felt the presence of one who has departed-a presence remaining still near him for weeks, months, and even years, and touching him so nearly that almost the voice could be heard and the form seen? Who is there who has not been conscious of strange intimations thus coming to him as from another world? Does it not seem, after all, that the friend is there, only speaking to our hearts more deeply, more intimately, more tenderly than in the ordinary life?
Nor need we be afraid of death, either for ourselves or for our friends, as if it were an evil or a harmful thing, lying ever in wait for us. On the contrary, it is surely a perfectly natural event, and part of the wholesome order of the world, as we see every day of our lives. Birth does not seem to us an evil thing, but rather a strange and wonderful passage from some other state of being into this present existence; and so death-which in many ways is the counterpart of birth-would seem to be just such a wonderful passage out of this world again; one perhaps out of many, many such passages which the far-journeying soul of man must make, under the wing of the ever-abiding Presence.
Nor would one perhaps-even if the chance were offered-wish to escape dying. That would hardly be desirable. For since everyone has to die-and such countless millions have made that passage into the unknown-there would seem to be something mean and unfriendly in trying to avoid the common lot. Better to share it frankly with others, whatever it may be. Probably indeed the escaping of this change would turn out in the end to be a considerable loss instead of a great gain. Fancy anyone being condemned to live, as now, for ever-and to wear out all his old clothes, and his old body, and all his old ambitions and passions, and to go on repeating the same old jokes and stories till even his old friends were worn out as well! What a Fate! But from such an end kindly Death does indeed deliver us.
And whatever the region to which we pass, Love saves us there, as it does here. It creates a world in which the soul can live and expand in freedom. The ties which bind us together here are not going to be snapt so easily as some of you may think. For indeed, I believe that those who truly love are already joined together in a world far beyond and behind the visible;-and in that world they are safe-and their love is safe-from the storms of time and misadventure.
Therefore do not think too much of the dead husk of your friend, or mourn too much over it; but send your thoughts out towards the real soul or self which has escaped-to reach it. For so, surely you will cast a light of gladness upon his onward journey, and contribute your part towards the building of that kingdom of love which links our earth to heaven.
E.C.
December 30, 1910 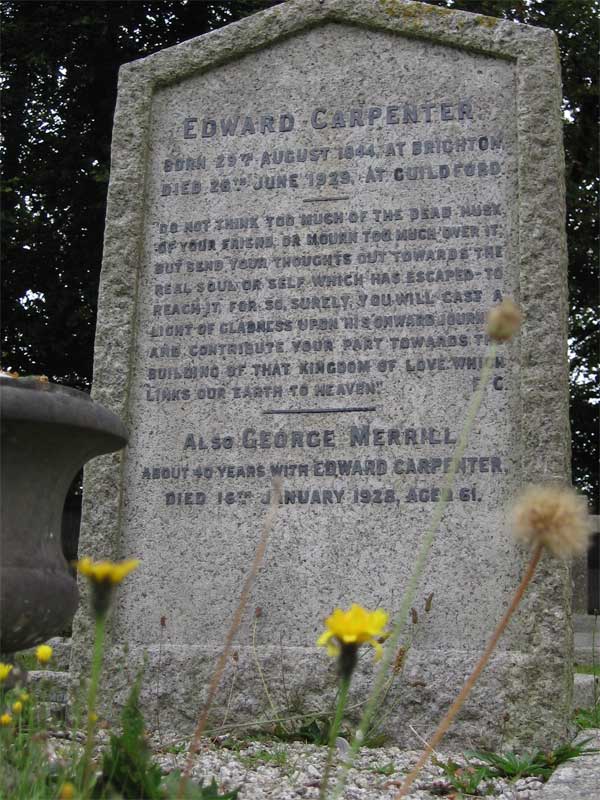 This farewell message appeared alongside the collection of essays ‘Edward Carpenter In Appreciation', edited by Gilbert Beith¹ and published by George Allen and Unwin Ltd in 1931. Within ‘The Editor's Preface' Beith wrote; ‘On his tombstone in Guildford Cemetery has been engraved a brave and hopeful message-the closing words of an address which he had composed with a view to its being read at his funeral. Very unfortunately, the existence of this was not discovered until several days after his death. It is now printed for the first time at the end of this volume.'
Sheila Rowbotham's biography relates further details of this mishap; how Carpenter had entrusted the farewell message to Harold Coxeter², who, having deposited it in the bank, then forgot about its existence. Henry Salt considered this all to be a part of the ‘disastrous confusion' that had surrounded the arrangements following Carpenter's death. (Edward Carpenter A Life of Liberty and Love, Sheila Rowbotham, Verso, 2008: p440).
Nevertheless, Beith concludes; ‘Although written as far back as 1910, it can be read as his farewell to all those who loved him and were inspired by his message.'
At Edward Carpenter's funeral itself, Henry Nevinson³ had given an impromptu address, in which he declared that Carpenter's ‘most valuable teaching was his own existence, the courage with which he dared the conventions of the world and lived his own life on his own lines, regardless of criticism and even of abuse.' (Edward Carpenter Prophet of Human Fellowship, C.Tsuzuki, Cambridge University Press, 1980, p192) Captain Leonard Green4 read the poem from Towards Democracy ‘Into the Regions of the Sun' (Edward Carpenter A Life of Liberty and Love, Sheila Rowbotham, Verso, 2008: pp383&438):

INTO THE REGIONS OF THE SUN

SO at last passing (the great sea stilled, the raging

All sorrow left behind, the great intolerable burdens
which men vainly try to carry,

All all abandoned, left there lying-

Suddenly lightened, like a bird that shakes itself free

from the limed twigs,

Lo! the dead we leave behind and pass to the realms

And not we alone.

By our love poured out, by the manifold threads and

strands of attachment to others-which cannot now be

By not one inwardly refused or disowned whom we

By the dear arms of lovers circling each other all

night long, by their kisses and mingled breath,

And love by night and day-thinking of each other when

absent, rejoicing so to be near;

By tramps over the hills, and days spent together in

the woods and by watersides;

By our life-long faithful love-(ah ! what more beautiful,

what in all this world more precious !)

By the life-long faithful comradeship now springing on

all sides, the Theban band henceforth to overcome the

And him who gave the calamus-token first;

Not alone, no longer alone-

But drawing an innumerable multitude with us,

Into the regions of the sun, into the supernal æther,

Lo! the dead we leave behind, and pass to the realms
of the living.

1.      1. Gilbert Beith, one of Carpenter's three literary executors. A former Red Cross ambulance driver and one of the many admiring young men who came to visit Millthorpe. He first appears in diary entries and letters in 1919, Carpenter describing him as ‘pathetically loving' (Edward Carpenter A Life of Liberty and Love, Sheila Rowbotham, Verso, 2008: p403).

2.    2.2.  Harold Coxeter was another of the young men who arrived at Millthorpe during the post-war years. (Edward Carpenter A Life of Liberty and Love, Sheila Rowbotham, Verso, 2008: p403).

3.      3. Henry Nevinson the campaigning journalist and war correspondent, known as ‘the King of Correspondence', developed a friendship with Carpenter from 1912 onwards, although they had first met briefly back in 1887 (Edward Carpenter A Life of Liberty and Love, Sheila Rowbotham, Verso, 2008: p121&325).

4.      4. Carpenter met the young Leonard Green in1912 through the B.S.S.S.P. (British Society for the Study of Sex Psychology) and he became one of his three literary executors along with Beith and George Clemas (Edward Carpenter A Life of Liberty and Love, Sheila Rowbotham, Verso, 2008: pp403&438)