Comments On "The Secret of Time and Satan"   By Joey Cain 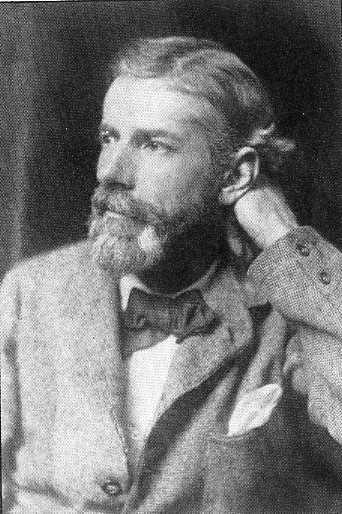 " The Secret of Time and Satan" is my Member's Choice Carpenter Work. I first discovered it in 1984. The setting was San Francisco's Bound Together Anarchist Bookstore on Haight Street. About 25 - 30 folks who were active in the Gay men's movement called the Radical Fairies gathered there every Thursday evening for our Circle during which we played music together, chanted, sang and shared food and pot. The central aspect of the evening was the Heart Circle, in which participants would share their inner lives with each other, tell stories, plan political actions, read poetry and build and weave the webs of community.

A regular of the Circle was a Rad Fey named Haia Ted Burke. He had a long history as a poet extending back to the early 60's Beats up to the present and was a strong and loving presence in the Circle. We had known each other for 4 or 5 years and he was aware of my interest in Edward Carpenter and wanted to read one of Edward's poems for the Circle. That poem was the "Secret of Time and Satan".

Its effect on the group was revelatory. Haia perfectly worked the rhythmic incantation of the poem culminating in the ecstatic build up to and release of the magnificent 6th Section.  The image of the Horned God and the fusion of Eastern Ideas and Whitman fit perfectly with the tools and mythology the Fairies were using to chart our own unique gay explorations of spirit. We marveled at how this poem written nearly 100 years ago by an openly gay man still spoke so strongly to us across the distance of a century. I began to use the poem to end the Closing Circles of week long Radical Fairy Gatherings. Up to 300 gay men, holding hands in a loving Circle, heard in Carpenter our own voice from the distant past and felt a connection both to him and each other, connections deepened and electrified by the poem.

Up to that point I had not really looked at Carpenter's poetry closely. It was his anarchist infused political writings and of course his formulations of gay consciousness and personhood that had drawn me to him. I probably was aware of Havelock Ellis's glib reaction to a cursory first perusal of Towards Democracy - "Whitman and water".  A reaction that would drastically change thereafter when Ellis would declare

"on growing familiar with Towards Democracy we find that we have here a distinct individuality, with, indeed, points of contact with Whitman, and using the same mode of expression, but a new and genuine voice nevertheless, not a mere echo. Even the form is not quite the same; it is flowing and eloquent rather than with the massive weight of Whitman's interrupted elephantine steps. ...  in this volume the bounds of person­ality are, as it were, loosened; and we have instead the soothing voice of an almost impersonal return to joy. Mr. Carpenter on the whole does not strive nor cry; he lifts up, rather, a tender voice of love and healing. It is the note of consolation rather than the stimulating "barbaric yawp" that we hear."

(For Ellis'1886 review of Towards Democracy go to the Forum's "Book Shelf" section or click here.)

The "Secret of Time and Satan" became my doorway into a deeper exploration and reading of Edward's poetry. Through it I came to see the greatness that so many thousands of admirers of Carpenter's day had ascribed to Towards Democracy. I realized that it did indeed have its own unique voice, personality and atmosphere and that a significant amount was great poetry. It is not unreasonable to say that Carpenter was the most original and successful poetic voice influenced by Whitman's free verse forms from the 1880s until well into the early 20th century.

"The Secret of Time and Satan" fuses two of Carpenter's source points into a poetic invocation of the experience of that union imagined as an archetypical encounter with the Western European pre-christian deity, Pan or the The Horned God.

What are the philosophical points that Carpenter fuses? In his personal copy of Towards Democracy, Gavin Arthur, Grandson of a President, Irish freedom fighter and astrologer, who visited Carpenter in 1923 and 24 and wrote a famous account of their time in bed together,(1) wrote:

The reference to Whitman is obvious. Carpenter's life began to change forever after his reading in 1868 the Rossetti Edition of Whitman's Poems. Edward would eventually visit Walt twice in the USA, and during his first visit developed a sexual and affectional relationship with him. Carpenter and Whitman corresponded with each other from 1874 until Walt's death in 1892. Whitman embraced and celebrated nature, the body, sex and the world. He laid waste to the soul crushing hierarchies of bourgeois existance. Carpenter found Walt's message spiritually, emotionally and physically liberating.

Ramakrishna is considered to have initiated a Hindu spiritual renaissance in the late 1800s when, under the yoke of British Imperialism and materialism, those spiritual aspects were under attack. Some of his key concepts were the oneness of existence; the sacredness of all living beings; the unity of God and the harmony of religions; and that the primal bondage in human life is lust and greed.

The "Secret" was written in 1888, 2 years before Carpenter traveled to Ceylon and India and sat with his friend Arunachalam's Guru Ramaswami. Carpenter however had a deep interest in all spiritual teachings extending back to his Cambridge years and credits the Upanishads and specifically the Bagavad Gita as having a profound influence on his thinking. By 1923 Ramakrishna would have represented that influence, at least to Gavin Arthur, due to the popularity of Ramakrishna's teaching in the West brought about by the work of his disciple Swami Vivikananda.

Read This Poem Out Loud and Pass Out Into Paradise

So how does Carpenter achieve this Union in the poem? Through the use of magical/poetic invocation.

The tradition of formal invocation, the "calling down" of the deity into consciousness extends at least as far back the Egyptians. The basic formula is to name the god/dess, recite their attributes (physical and psychological), and name the powers they bring. Then through art create an intense and ecstatic identification with the deity causing the consciousness to be flooded or possessed with the knowledge, the gifts, of the deity. This is often done in the form of telling or acting out the deity's life story. Looked at as a psychological practice it is bringing into consciousness an aspect of the unconscious where the particular unconscious aspect is the deity. Carpenter follows this very pattern in the poem. He names the "god" and his powers in the first stanza - divine beauty (what he came to call Cosmic Consciousness later).  He then names the first attribute, the method for approaching the deity.  Section 2 is the god starting to "wake". In 3 we have the naming of the gods physical attributes, Whitman's radical celebration and deification of the flesh and world (lots of body parts here).  Section 4 echoes Section 1 in naming the attributes of approach. Section 5 is the twin to 3 and names the emotional/psychological state, what Carpenter saw as the influence of the East. The form even reflects the style of Eastern teaching in contradistinction to the Whitman-like form of Section 3.  In Section 6 the ecstatic state is achieved through the rhythm of the words themselves and the god appears as Pan and possesses the aspirant in the dissolution of equals,

"Till we stood again in Paradise."