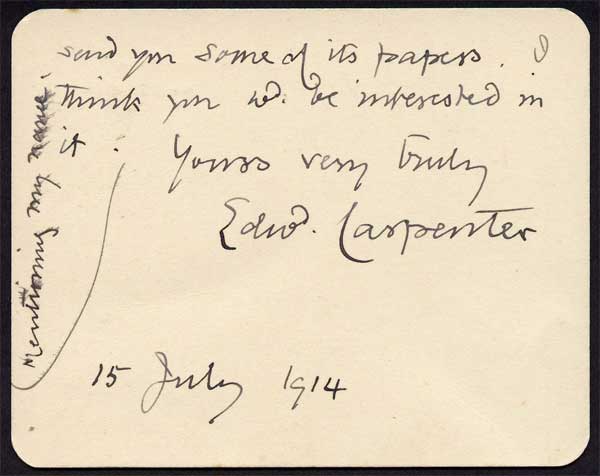 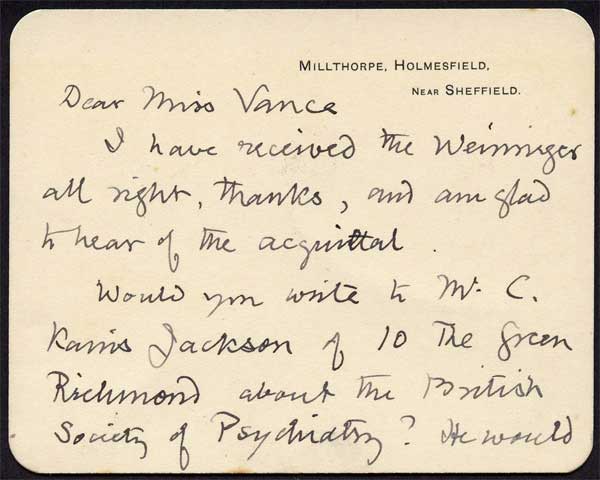 I have received the Weininger¹ all right, thanks, and am glad to hear of the acquittal.

Would you write to Mr. C. Kains Jackson² of 10 The Green Richmond about the British Society of Psychiatry³? He would send you some of its papers. I think you w.d (sic.) be interested in it.

1.Otto Weininger, Sex and Character  - previously lent by Carpenter to aid the defence of the forthcoming court case (see Letter 2).

2.Charles Kains Jackson (1857-1933); an English poet closely associated with ‘the Uranian School', editor from 1888-1894 of the monthly magazine Artist and Journal of Home Culture promoting a homoerotic Hellenic ideal (London and the Culture of Homosexuality, 1885-1914, Matt Cook, Cambridge University Press, 2003: p127). Kains Jackson went on to work with George Ives and others in creating groupings, such as ‘The Octave', supportive of Uranians and their cause. He became an active member of the B.S.S.S.P.. (Edward Carpenter A Life of Liberty and Love, Sheila Rowbotham, Verso, 2008: pp332-3).

3.Carpenter played as central role in the formation, in August 1913, of the new British Society of Psychiatry - its ad hoc committee including Kains Jackson and Ives. The Society initially formed to enable a meeting where Magnus Hirshfeld could address a group interested in homosexual law reform, at the Hotel Cecil on August 12th.  At the inaugural meeting on July 8th 1914 (one week before this letter to Miss Vance) the name was changed to the British Society for the Study of Sex Psychology (B.S.S.S.P) (ibid. p333). The Society continued to provide an arena for the discussion of homosexual concerns - Carpenter's paper Some Friends of Walt Whitman, here given its web premier, was read before the B.S.S.S.P. in 1924.