In the years that followed the Oscar Wilde's conviction, with their increased atmosphere of fear and vulnerability for homosexuals, and at a time when so many people had gone to ground, Edward Carpenter was increasingly approached as a source of support and advice. This was particularly so following the publication of his books that dealt specifically with homosexuality.
The following series of letters, currently in private ownership, are an example of his substantial correspondence of this kind. He writes back to a Miss Vance (original letters not known), firstly following her enquiry in 1913 concerning his pamphlet on homosexuality, and then, in 1914, to give her advice concerning the arrest and forthcoming trial of an unnamed individual, whom Miss Vance was assisting.
he concluding letter of the correspondence, written after the conclusion of the trial, will be available in the next quarterly update of the Forum website...

Miss Edith Maurice Vance (1860-1930), is described as a free thinker. Her name appears within the minutes of the Legitimation League in 1895 (notes kindly supplied by Sheila Rowbotham), the League then agitating for equal rights for illegitimate children. In 1906, she is listed as secretary of the National Secular Society (appearing as a representative within the attendance list for the funeral of co-operator and secularist George Jacob Hollyoake). 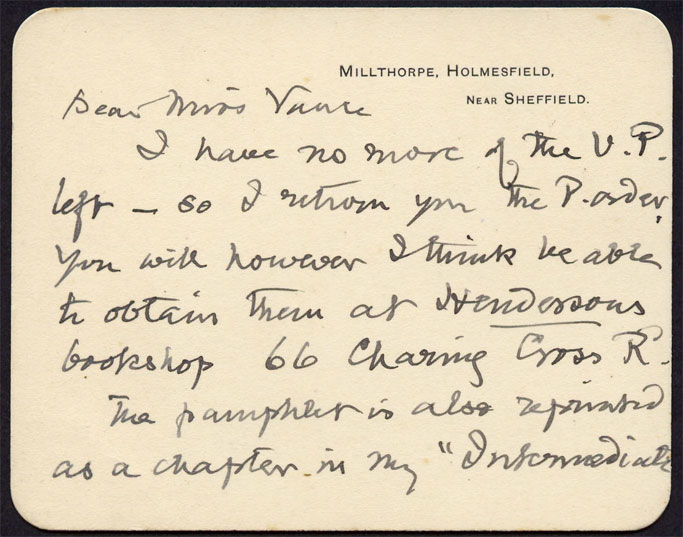 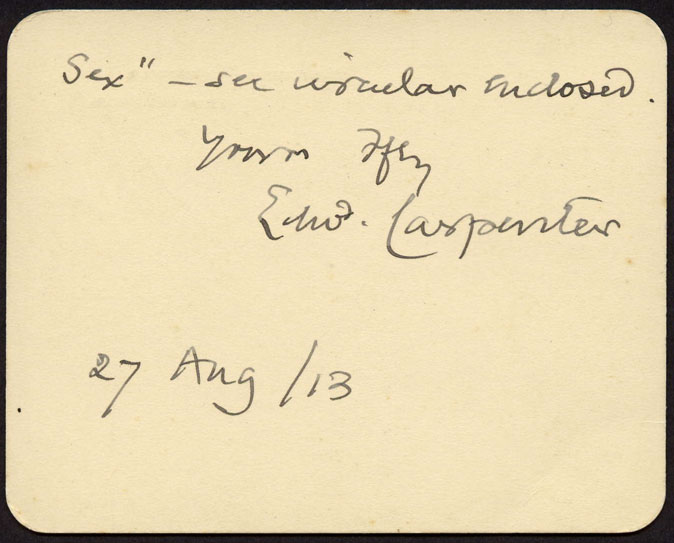 MILLTHORPE, HOLMESFIELD, NEAR SHEFFIELD.
Dear Miss Vance
I have no more of the U.P.¹ left - so I return you the P.order (sic.). You will however I think be able to obtain them at Hendersons bookshop 66 Charing Cross Rd².
The pamphlet is also reprinted as a chapter in my "Intermediate Sex"³ - see circular enclosed.
Yours ffly (sic.)
Edwd. (sic.) Carpenter
27    Aug /13

1. An Unknown People - pamphlet by Edward Carpenter. Reprinted from the Reformer. London, A. And H.B.  Bonner, 1897. Second edition, 1905. Details as listed in Carpenter's My Days and Dreams (1916), Appendix ІІ, Bibliography.

2. Hendersons, a ‘political bookshop', became known as "the Bomb Shop", and in the 1920's was proud to be the only socialist bookshop in the West End. Defiantly painted in red and gold, the walls bearing the names of renown radicals from the past, it had been designed and decorated by the socialist painter Walter Crane (see the reminiscences of Reg Groves in The Balham Group - How Trotskyism Began, Pluto, London, 1974, Ch. 3, and on line at  www.marxists.org/history/etol ). In 1934 the ailing ‘Hendersons' was bought by the wealthy communist Eva Collet Reckitt and was reopened as ‘Collets', which remained in business until 1985 (see Radical Bookshop History by Five Leaves Publications on line at www.fiveleaves.co.uk/radical_bookselling.html ).

3. Edward Carpenter, The Intermediate Sex: a Study of some Transitional Types of Men and Women. First edition. London, Sonnenschein; Manchester, Clarke, 1908. As listed in My Days and Dreams, Appendix ІІ. 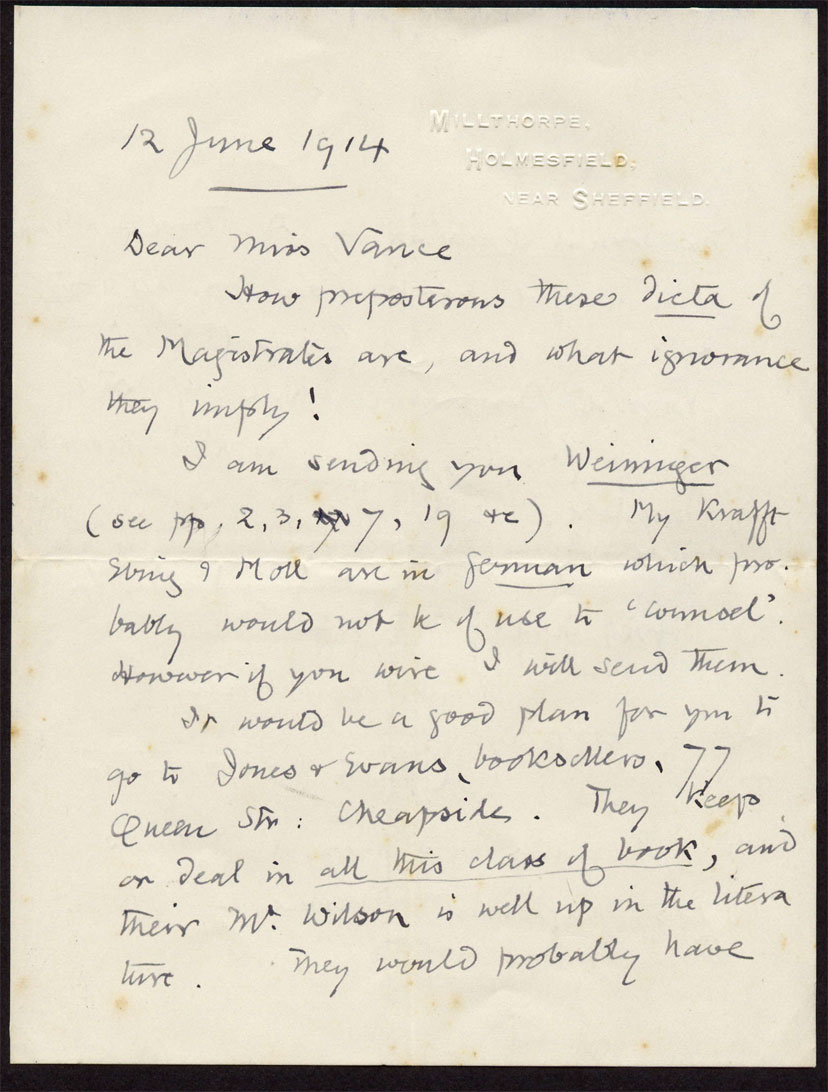 MILLTHORPE, HOLMESFIELD, NEAR SHEFFIELD.
12 June 1914
Dear Miss Vance
How preposterous these dicta of the Magistrates are, and what ignorance they imply!
I am sending you Weininger¹ (see pp.  2,3,7,19 etc).). My Krafft Ebing²  & Moll³ are in German which probably would not be of use to ‘counsel'. However if you wire I will send them.
It would be a good plan for you to go to Jones & Evans, booksellers, 77 Queen Str (sic.) : Cheapside. They keep or deal in all this class of book, and their Mr. Wilson is well up in the literature. They would probably have The Sexual Question³ª by A. Forel - which is a useful book (see pp. 243-7 etc.)           For Counsel Mr. Harold Benjamin, K.C, of 5 Pump Court, E.C, is to be recommended.
Hoping these few notes, & the book, will be of use.
Yours very truly
Edwd. (sic.) Carpenter
PS. Ribmans book shop is I think 125 Shaftesbury Avenue. 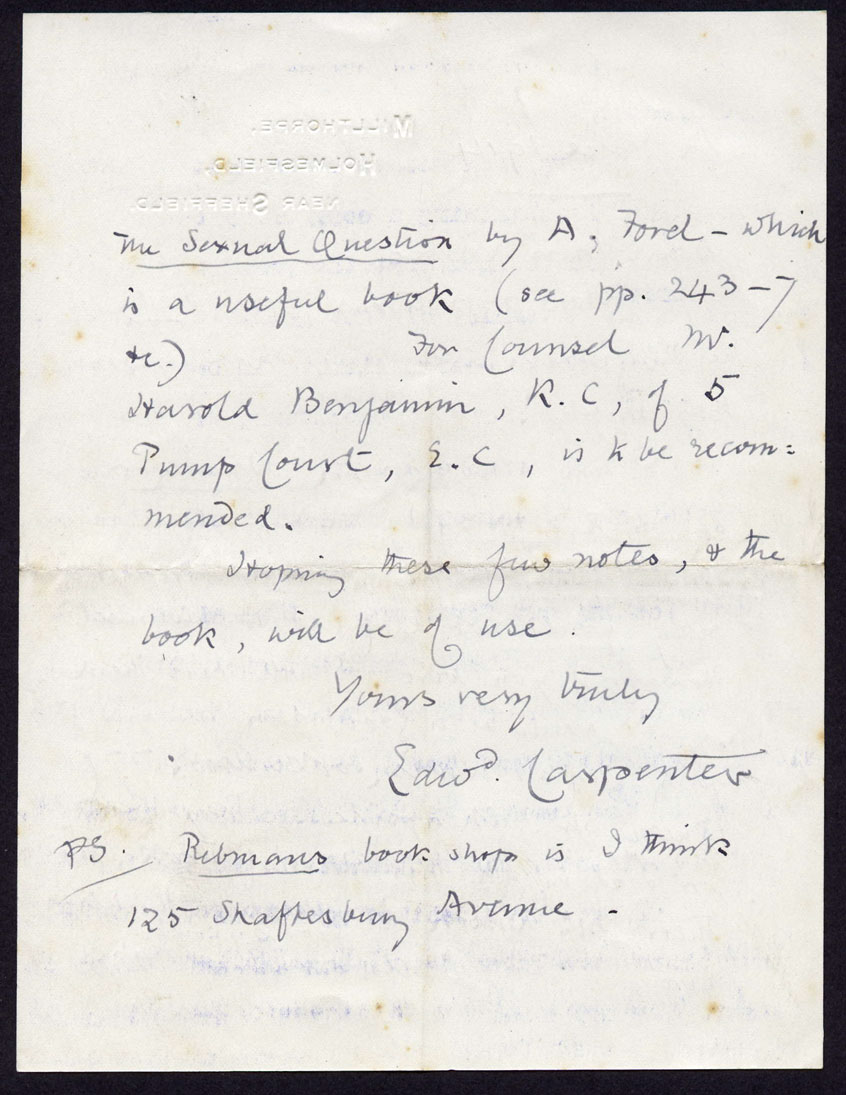